After Liverpool ended their long goal drought at Spurs, Mohamed Salah can maybe end his own barren spell at West Ham on Sunday.

“Salah has scored in six of the seven games he’s played against West Ham, so after six league games without a goal he’ll find the net again.”

You wouldn’t have thought West Ham would head into this game against the champions with the chance of going above them, but such is the way this season that David Moyes will even fancy his chances of just a sixth win in 35 games against the Reds given the Hammers are absolutely flying going into the contest.

West Ham may have preferred Liverpool not to have ended their marathon goal drought and looked something like their old selves against Spurs, but the hosts have had two days extra rest and sit on a six-match winning run that’s lifted them into the lofty heights of fifth.

Let’s be clear though, West Ham have been good all season, since opening up with a bad defeat to Newcastle they’ve beaten the likes of Leicester, Wolves, Everton, Villa and Leeds, drawn with Man City and Spurs and only lost to Chelsea, Man Utd, Liverpool and Arsenal.
Eight of their 10 league wins this season have been by a single goal, which shows they can dig out results, and importantly in this most chaotic of seasons West Ham are actually an oasis of calm on the playing front with Moyes having a relatively settled, well-rested side to pick.

The addition of Jesse Lingard on loan will be another bonus for a team that will now surely be eyeing a spot in Europe.

Jurgen Klopp was almost emotional as Liverpool ended their scoring drought at Spurs, and the Reds looked a lot more like champions as they outclassed Jose Mourinho’s side – even though they did benefit from some awful defending for the goals.

Their next test in London should be much tougher though, with West Ham sure to provide a tougher nut to crack in defence and with Joel Matip adding to Klopp’s injury crisis – it’s gone from a headache to a migraine at Anfield this season.

With Fabinho doubtful, Nat Phillips should start alongside Jordan Henderson in yet another central defensive pairing this season. Phillips played in the reverse fixture at Anfield but this will be much tougher against the excellent Michail Antonio instead of the disappointing Sebastien Haller.

The Reds are unbeaten in nine (W7 D2) against the Hammers and also unbeaten at the London Stadium (W3 D1) so far but this shapes up to be their toughest visit yet.

In the scoring charts, your eye should firmly be on Mohamed Salah, who hasn’t scored in six yet is still the Premier League top scorer with 13.

His lack of goals is not for the want of trying, Salah has 3.5 shots for every 90 minutes in the league this season, with 1.6 on target per 90. The Egyptian has a fantastic record against the Hammers having scored in six of the seven games he’s played against them.

After having a goal ruled out against Spurs he’ll be desperate to get on the scoresheet and I wouldn’t back against you collecting on the 5.0 on him to be the first goalscorer at the London Stadium. He may be favourite in the anytime goalscorer market at 2.0 but that’s still worth taking. 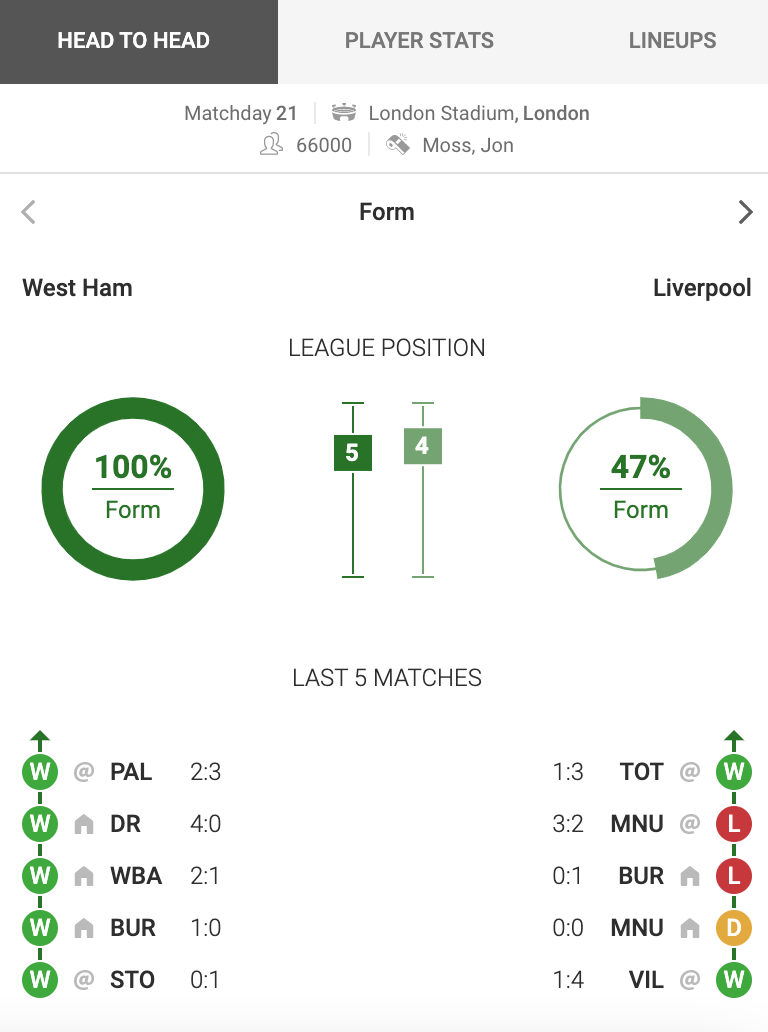 BET OUR PREDICTION AT BETFAIRet365